In November last year was my debut flying Delta Airlines from Buenos Aires to Atlanta , as a stopover prior to New York.

I was looking forward to this second chance as we were going with our son this time. He, accustomed to traveling on LAN, wanted him to fly for another airline.

I wanted to get to Ezeiza with 4 hours of anticipation. I am of those who prefer to wait at the airport before home, if you already have everything ready

I also wanted to take advantage of the Star Alliance VIP in Ezeiza (see the Post) , to start the trip in the best way.The time came and the remis was already waiting at the door of the house. A new adventure was beginning …

Already on the Ezeiza – Cañuelas Highway, and as if to kill those 15 minutes separating El Patio from the Airport, I started to review all the papers for the last time. We arrived at the Terminal that at that time was very quiet. A beautiful day accompanied. While it was early, I was surprised by how few people there were in the Hall and surroundings. 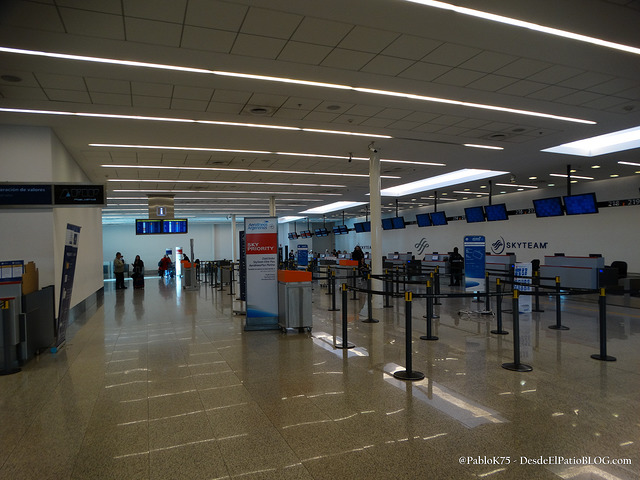 We were warned that they were still not checking in for the Delta flight. In fact, on the counters, they were checking out the Air France flight slips

As seen in the photo, the solitude and tranquility reigned in the hall of the Terminal.

Out of curiosity I approached the Yellow Terminals of Self – check in which were absolutely empty. We tried and successfully already had the 6 boarding passes issued (2 per pax).

Pegadito to the yellow machines, and as we saw that in AFIP there was no one to declare, we approached to ask for a form that we already had printed.

Although it was not possible to present the declaration for not having issued the boarding pass, we did the same procedure. For them it was also to advance before the majority of the people

Already with the Boarding Pass and the DD.JJ. Of AFIP sealed, we were ready to go up. But we needed to dispatch our luggage, so we went to wait near the counters.

As more passengers began to arrive, 2 rows were formed: those who had issued the boarding pass and those who did not.

At that time, the ranks were similar and were passing to these counters to do a sort of previous check where Delta girls wrote personal information on a worksheet. Punctually at 5:00 pm they started calling. The girl who took care of us, very nice, made everything very fast. He despatched all the bags and we finished with the check in. By that time, the malon had arrived

We quickly went to the security checkpoint. There was no one ! Those of the PSA were chatting with each other. We passed the door and entered migrations where the room was absolutely empty. As soon as we arrived we entered box 3 without delay.

17.20 hs and we were already looking at some things in the free-shop. 20 minutes to check in and migrations. A luxury

Very few people at that time and very few planes to photograph. Directly we went for the Star Alliance VIP, walking up to the entrance in front of Gate 9.

Minutes before 19.00 we went to the gate 14 where the flight was leaving. The line had already formed.

Behind us, on the other side of the glass, the Delta Airlines Boeing 767 N171DZ license plate of almost 17 years old waited on platform. 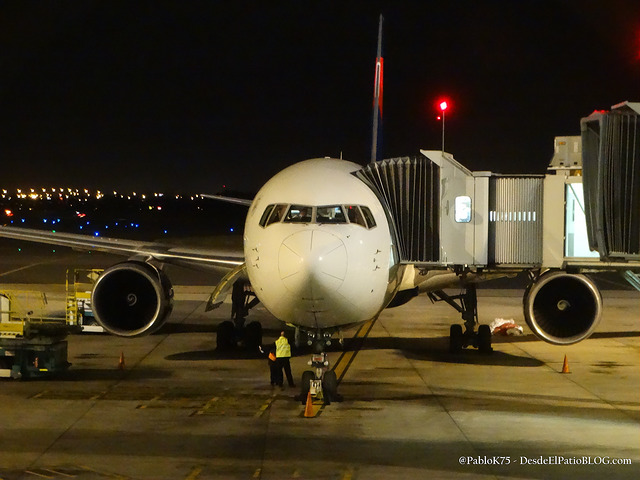 Arrived the call to embark from Zone 2 and after the final control of hand luggage, we were already walking up the sleeve.

Arriving at the door of the plane we were met by a nice TCP and I asked him to take some pictures of the cockpit, which he acceded very kindly.

I entered with son, who sat in the command of the right and with cap of captain included, we took some photos.

After the visit to the cockpit and a small talk with the pilots, they said goodbye with a “enjoy the flight” and we were happy for the background. We entered the right aisle looking for our seats where the wife was already sitting.

We continue to the bottom and come to our seats. The middle 3, row 32. I sat on the left. I started playing with the monitor. I had my own FlightRadar

While I had fun and prepared the map for take-off, my son and canchero, his movie was chosen. We embark all on time, and wait for our turn. Very calm even though the plane was complete. 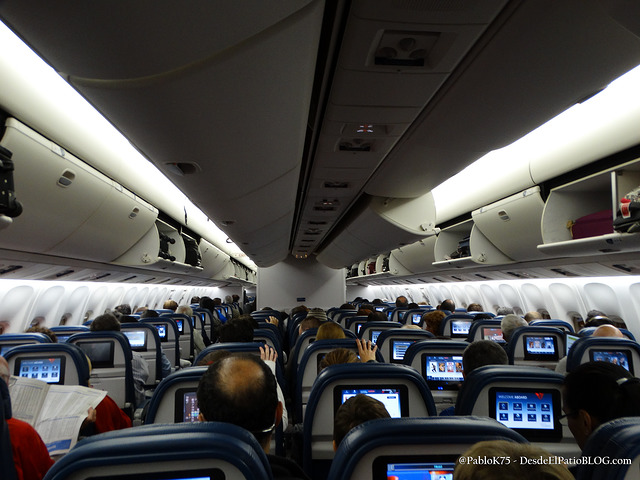 Exactly at 20.05 hrs we made the push back and we rolled to head of track 11 where we waited approximately 5 minutes until the final authorization to take off.

We passed over El Patio and greeted from above to Dog.

Once stabilized they distributed the forms of migrations, the hot wipes and a small bottle of water DaSani.

1 hour later they brought the food for son. I had done my homework and had requested via web, the special meal. His seat was identified with the CHML sticker (food for children).

What was in there? A delicious Milanese (I ate a bit !!) with yellow rice

For adults the choice was chicken or pasta: I went for the second. They passed twice offering drinks and I used to write part of this report in my beloved and already deceased Startac

Then I started to watch a movie: “The Theory of Everything”. Then I tried to sleep but I could not, so I took advantage of seeing “Unbraken”.

I fell asleep, so I turned everything off and went to sleep for a few hours. I woke up and went to the bottom.

They were already preparing breakfast to start the service. Many had already awakened, others were still asleep. 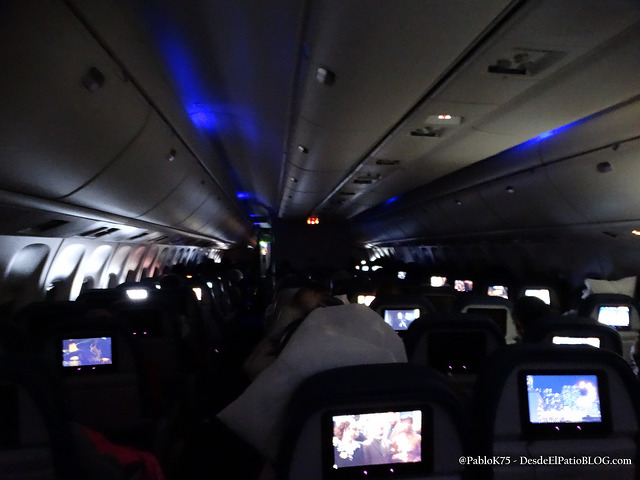 Missing an hour and a half to get to Atlanta, they turned on the lights for breakfast.

Again they brought the son’s food first. And the adults. Very rich both sandwiches

In the meantime I took advantage of and continued with mine

They quickly lifted the service and within minutes the Captain announced the descent The landing was very smooth and after a few minutes we reached the platform. There you can see that the Airport is immense !!

In Atlanta, even at dawn, everything was dark and from the middle seats I could not take any photos. When we got there and got off the plane, there I was able to take a photo of him. 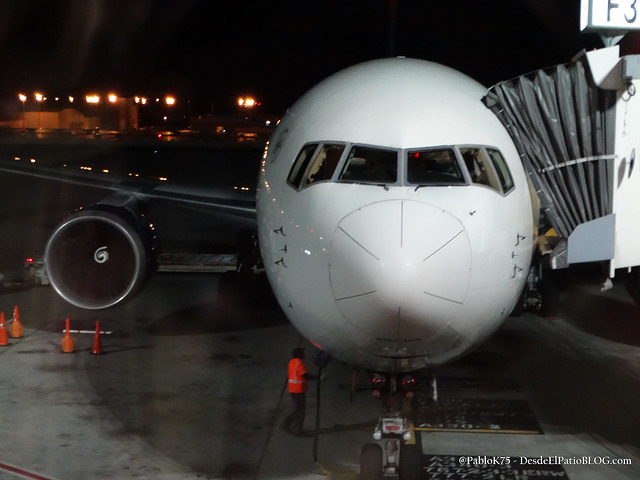 It had fulfilled the first of the three flights of the day.

We had migrations ahead and waited almost 3 hours to continue with the second flight to the city of Miami aboard a Delta MD80, to then connect with a B737 from American final destination Cancun.

But that we leave for future Post, already with photos from the window

It’s the third trip I make with Delta’s B767, and I must say that in all three the service and flight in general was excellent. A watch.

Although I find more comfortable the seats of tourist class of the Boeing 767 of LAN, would doubtless fly again by Delta, and more to the price that I bought the tickets

Delta Air Lines was awarded “Best Airline to North America” ​​in the Companhia de Viagem Award, produced by Group of Company, responsible for the magazine and television program On the second edition, the award was created to recognize the best travel services for Brazilian customers in 15 categories.

The awards ceremony was held last night at the Museu Brasileiro da Escultura – MUBE, and the winners were announced by Marcio Moraes, CEO of Grupo Companhia, television presenter and master of ceremonies during the event. Christophe Didier, director of Delta for Brazil and Multi National Accounts, received the award on behalf of Delta.

“Delta is honored to be recognized as the Best Airline to North America by Companhia de Viagem. I want to thank our team in Brazil for their incessant dedication to excellence, following Delta’s vision to become the best US airline in Latin America and the Caribbean, “Didier said. “Delta highly values ​​customer feedback and this recognition shows that when you listen to your customers and invest in their comfort and travel experience, they maintain their preference and loyalty.”

“I am very pleased to honor Delta Air Lines as the Best Airline to the United States with the Featured Travel Company Award, the most important tourism awards in Brazil. Brazilians are now traveling more than ever before, with North America as the international destination Number 1, “said Marcio Moraes, CEO of Grupo Companhia. “The commitment of Delta Air Lines to its passengers is the best in the industry, and this is demonstrated by its extraordinary service and technological innovation.It is clear that every passenger is a priority for Delta, making our election simple as the number one airline to North America “.

Delta has invested $ 3 billion over the past two years to improve the customer experience, and also made an investment in regional strategic alliances such as the one it has with GOL. Through its alliance with GOL, Delta offers access to more destinations within Brazil than any other US airline. Delta customers can travel to 21 Brazilian cities that cover 99 percent of the top destinations that travelers traveling from the United States wish to visit. Delta operates 35 direct weekly flights between Brazil and the United States, including Atlanta, Detroit and New York-JFK to Sao Paulo, as well as from Atlanta to Rio de Janeiro and Brasilia.

Passengers flying to and from Brazil in Delta’s BusinessElite booth enjoy a wide range of premium products for a comfortable, relaxed and productive flight experience, including fully reclining seats. Delta also announced that beginning in June 2013, the BusinessElite cabin will offer the new bedding for the Westin Heavenly flight, which includes a Westin Heavenly pillow and luxurious duvet as well as a lumbar pillow for passengers on longer flights Of 12 hours, designed and manufactured exclusively for Delta.

Additional investments to enhance the customer experience include the recently redesigned menu for BusinessElite by chef Michelle Bernstein as well as an updated wine list by master sommelier Andrea Robinson; The ultimate in entertainment system with 250 movie library, 100 TV shows, 50 hours of HBO, video games and kid-friendly programs; Priority of inscription and collection of luggage and the new kit of amenities with products Tumi and Malin + Goetz.

In terms of technological innovation, Delta launched the Fly Delta application for iPad , part of a US $ 140 million investment in technology that will significantly improve the digital and online experience for the customer, including the launch of the new delta.com In mid-November and self-service kiosks renovated in September 2012.

Trying to improve the Portuguese-speaking customer experience, Delta launched two new social media channels last summer, promoting communication through different channels. Your Twitter channel Delta and @DeltaAjuda, provide customer support before, during and after the trip, while your Facebook channel goes beyond customer service to provide useful travel-specific suggestions from Brazil and guidance to enhance the travel experience. Travel of Brazilian customers.